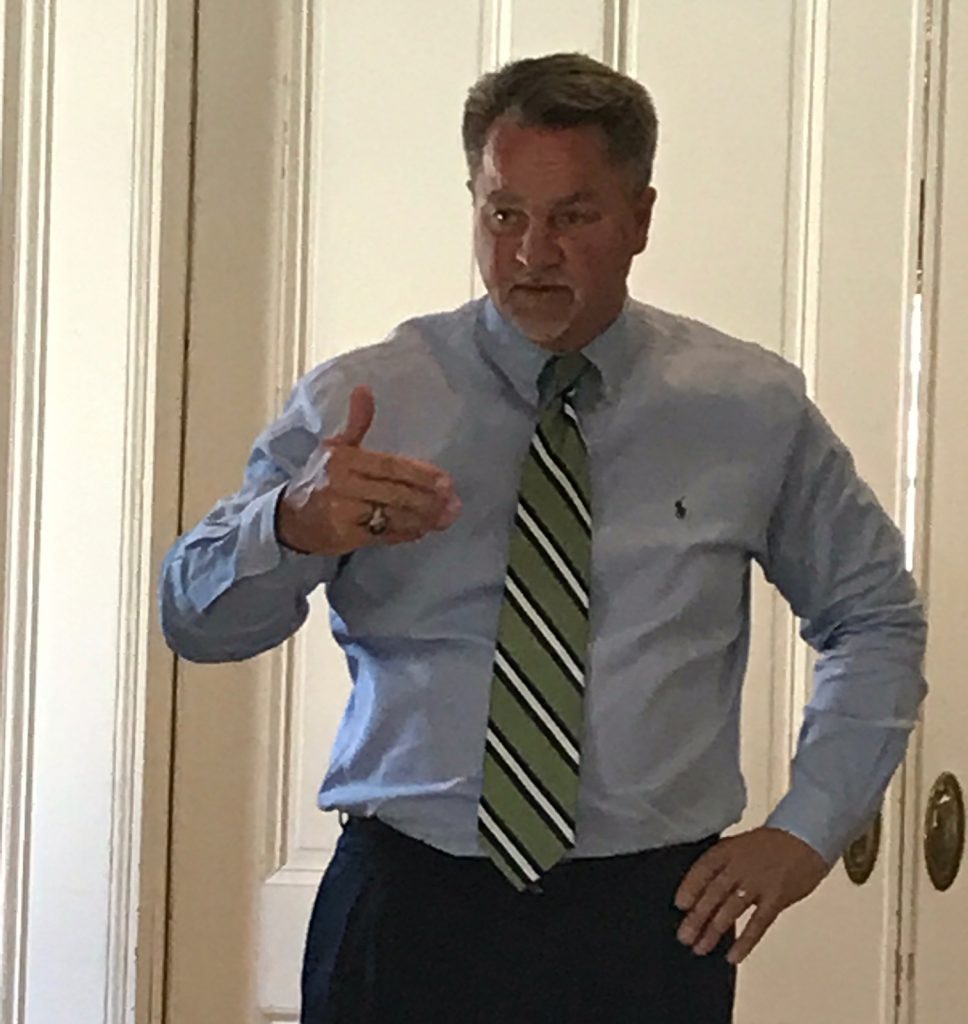 CEO Rick Allen of the Warren General Hospital. Rick grew up in Warren, attended Warren Area High School and came back from Pittsburgh to be CEO of the WGH almost 3 years ago.
When Rick came on board, the hospital had no cash, was in a negative cash flow condition and was financially in disarray. Since taking on the job, last year’s loss was minimal and the hospital is on line to show a positive cash flow for the first time in many years.

The hospital needs to pay down its debt and to purchase new equipment.
Quality is the most important issue for Rick and his staff. They have been successful in showing an increase in quality, patient satisfaction and ER through put. Every morning they look at the ER time to see a physician and time from entry to release. They are trying to maintain less than 60 minutes from in to out.
The hospital was recently cited as one of the top 100 rural hospitals out of 2,000 rural hospitals. Their metrics are showing that several departments are in or close to the top 90 percentile of all hospitals in the country for patient satisfaction.
The hospital has just hired 15 newly graduated nurses from around the area nursing schools. Also just announced was the hiring of three new physicians. 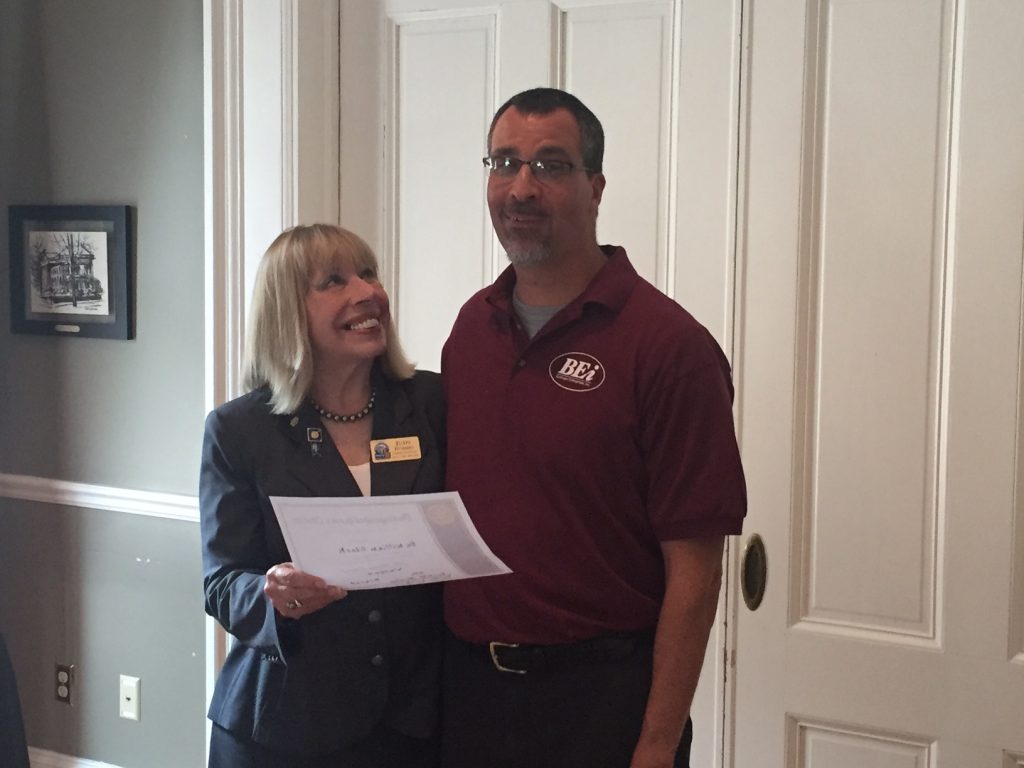 District Governor Judy Hughes visited our club to talk about her projects for the year and to help our club set our goals.

Judy then awarded Rotarian Dr Bill Clark the 4-Way Test Award. Dr Clark exemplifies the 4 way test in so many ways. He is a man of integrity and is always community-minded. He is the Executive Director at BEI, a non-profit whose mission is to enrich the lives of people with disabilities by being the most innovative provider of vocational, life, and social opportunities through a caring and dedicated staff.

He set-up the student of the month program working with guidance counselors at local schools and coordinated the visits of the students to the club. He also set-up our club to help pack food for the local backpack program. Dr Clark also took on scheduling the weekly speakers for the club. He organized lists of local businesses, non-profits and people of interest. We are a better club for having Dr Clark as a member. 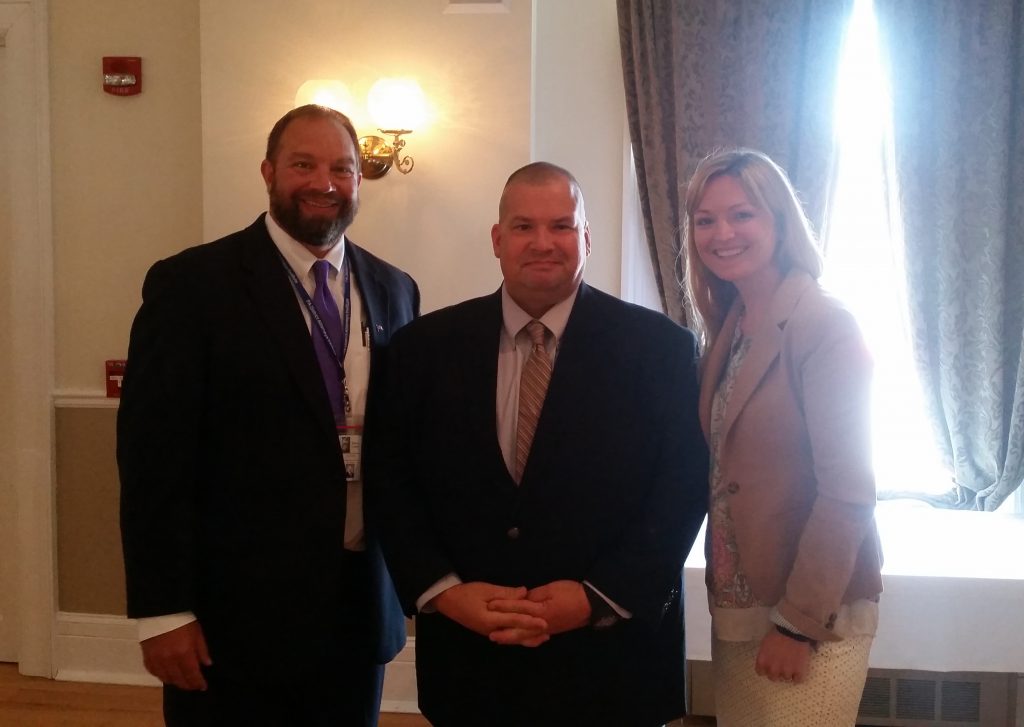 Thank you to everyone who attended our first Rotary Community Event. Our spotlight guests were District Attorney Greene, Detective Chimenti, and Cameron Skelton of Northwest speaking on the Children’s Advocacy Center. The mission of the Warren County Children’s Advocacy Center is a “safe and supportive environment that is dedicated to serving child and their families. Professionals from multiple disciplines within the community coordinate investigations, interventions, prosecutions, and provide specialized treatment while reducing trauma and promote healing.” Last year there were 170 new child abuse cases in Warren County. The Children Advocacy Center will be a safe haven where children will only have to tell their story once in a comforting and supportive environment. DA Greene, Detective Chimenti, and Cameron Skelton were instrumental in helping establish the center. The Children Advocacy Center hopes to be opening in the next few months – you can follow their progress on their facebook page: https://www.facebook.com/warrencountypacac/.