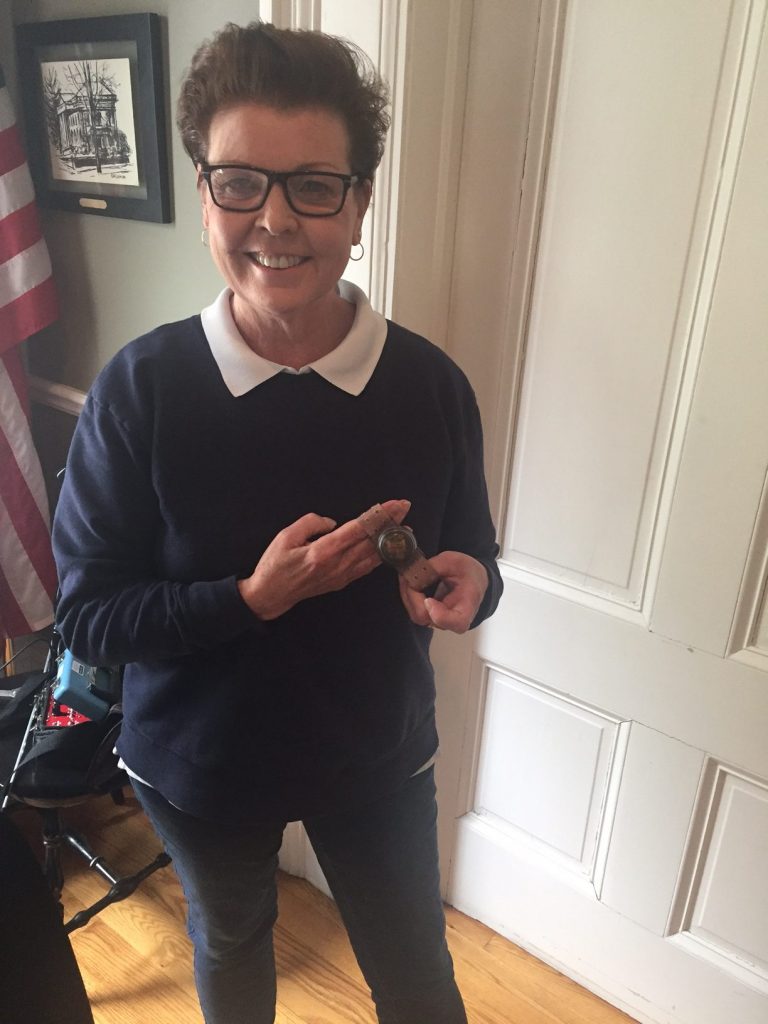 ounder of “Operation Take Me Home” was our speaker, last Wednesday. She has a grandchild that is autistic and does not speak. About 9 years ago they lost him for a short time at a museum and as a result of that, she looked into what programs were available to help with the problem of a child not being able to speak and being inadvertently separated from his parents.

She found that there was a program that provided a wrist band with a radio transmitter for people that could not speak or had problems such as Alzheimer’s.

After doing her research she began “Operation Take Me Home” under the auspices of the Don Mills Achievement Center. Wrist band transmitters were purchased and area first responders were trained in locating the transmitters. At the time the program was started the transmitters were $425 each, now they are about $250. There are nine children and adults in the program. Pam is responsible for replacing the batteries in the units and the cost of $6.00 per battery change is the only cost to the participants. 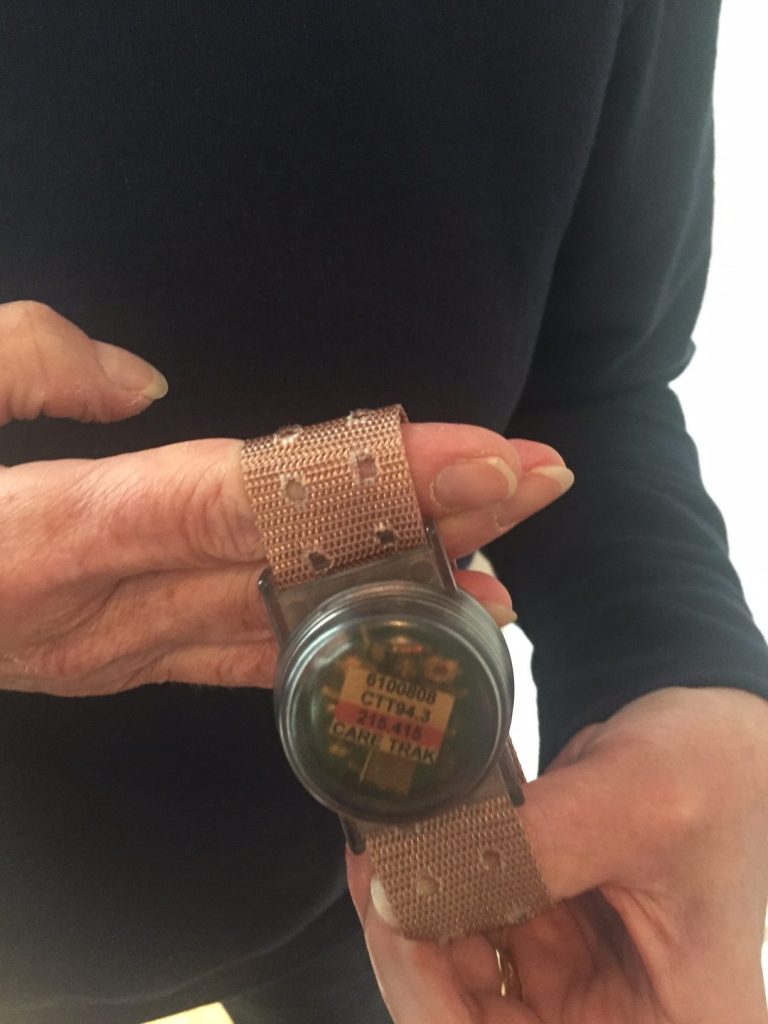 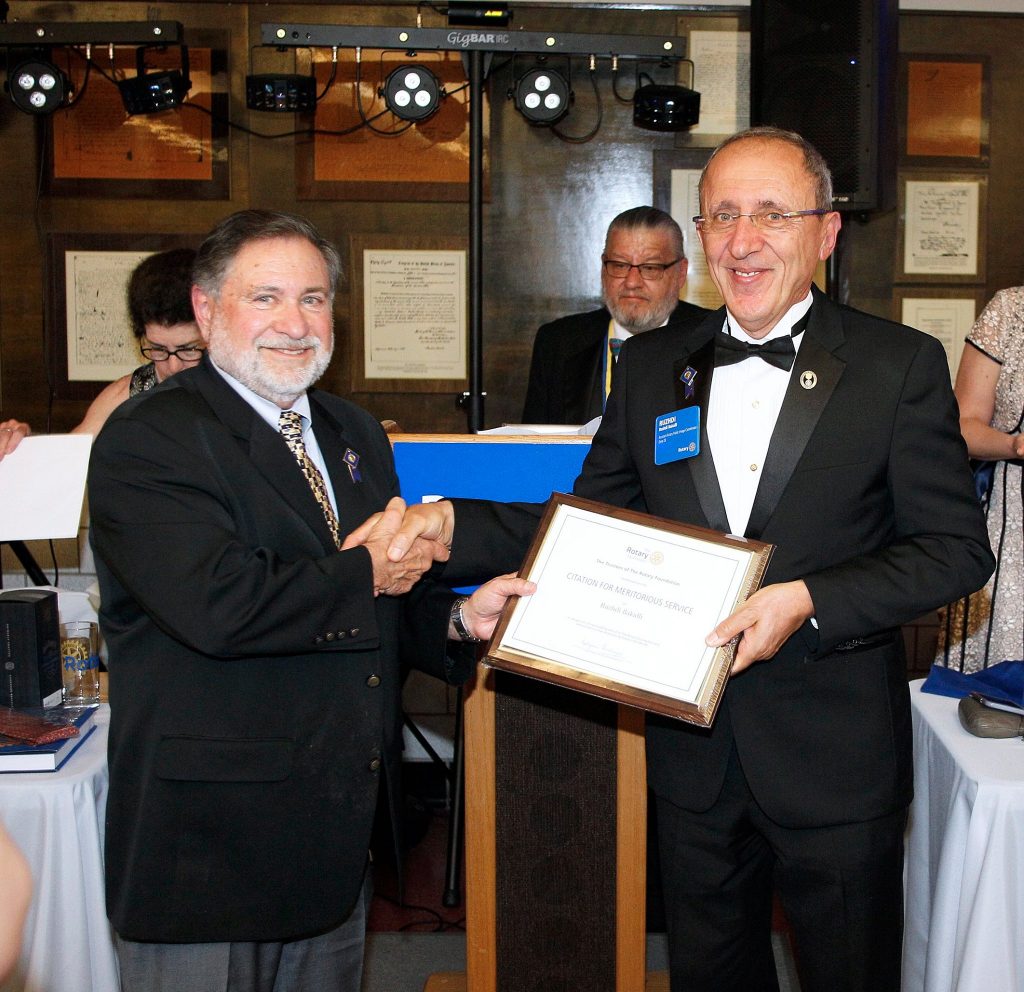 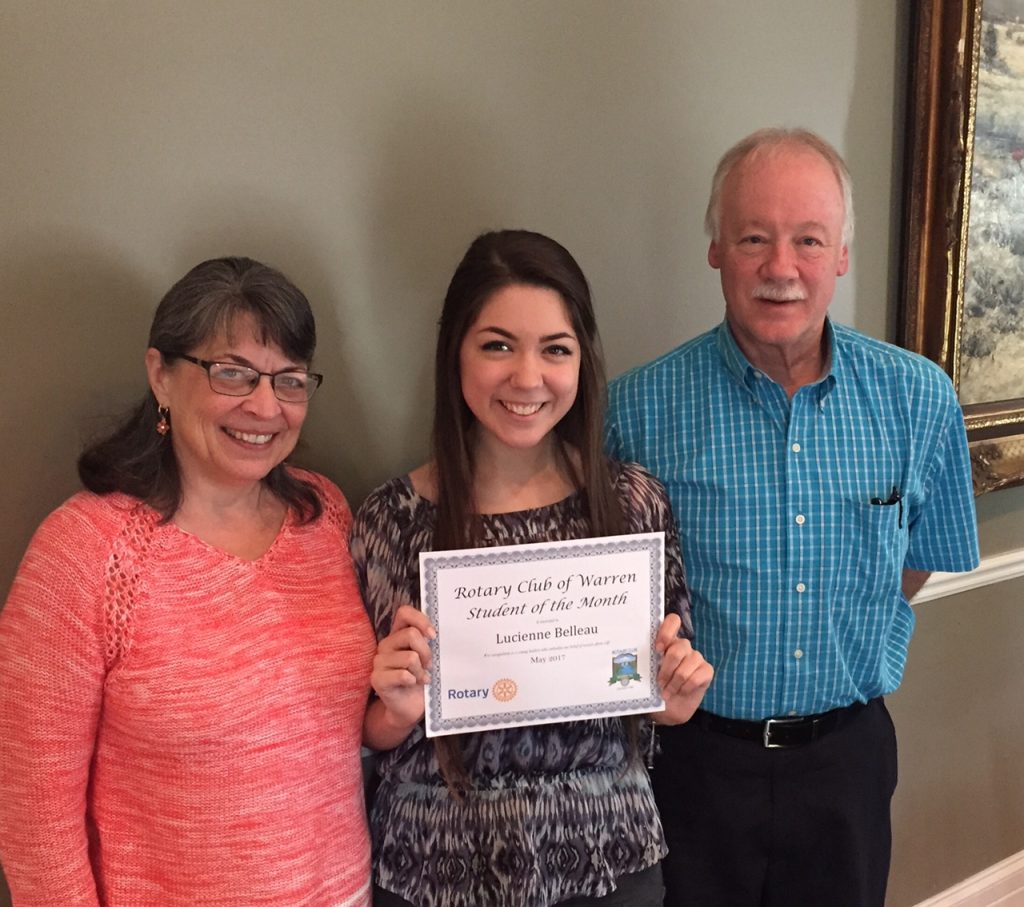 Lucienne (Lucy) Belleau is the May Student of the Month. She is the youngest of five girls. She is involved in a variety of activities including Youth Connection, Battle of the Books and Mock Trial. She is actively involved with her church and has been involved in Youth Group and Vacation Bible School as a teacher. 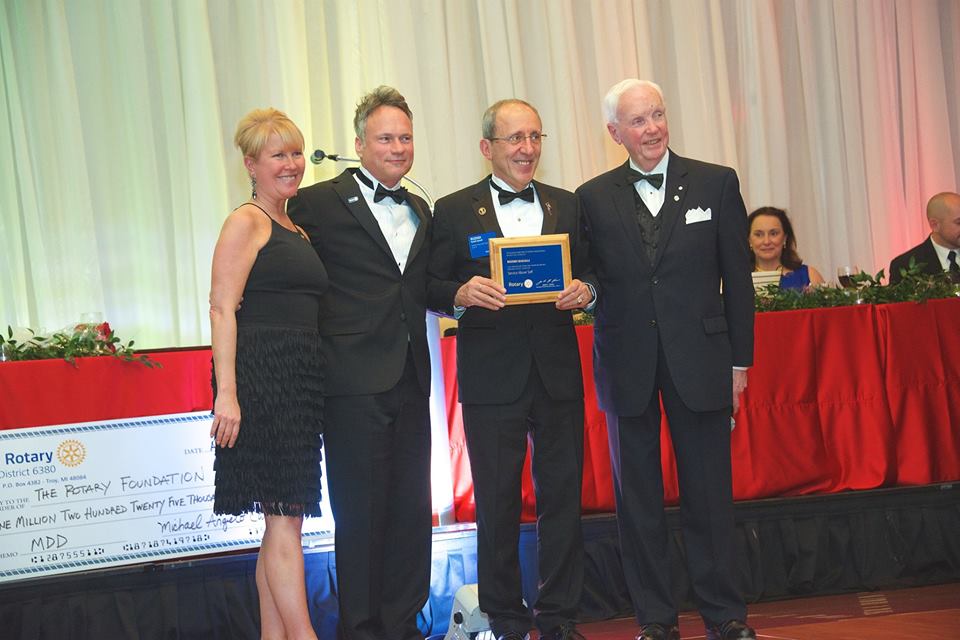 Rotary’s highest honor, the “Service Above Self” award, has been presented to Past District Governor Ruzhdi Bakalli of Warren by Rotary International. This award is presented yearly to not more than 150 recipients worldwide who have demonstrated their commitment to helping others by volunteering their time and talents.

The Rotary International Board of Directors has established this award to recognize and appreciate those Rotarians who are actually embedded with the Rotary’s motto “Service Above Self.”

RI Board considers this award as the highest honor that Rotary International can bestow on a Rotarian for his contributions.

Current and immediate past district governors and current and past RI directors can nominate candidates for this Award.

This trust and appreciation of the work done by Bakalli is not only an honor to him personally, but to all Albanian Rotary in general.

Known as the Paul Harris of Kosova, Bakalli, who has for years lived and worked in the U.S., was the founder of Rotary in the newest country in the world, the Republic of Kosova. For his activities and commitment to Rotary, he has been honored by Rotary clubs in Kosovo, Albania and now Rotary International:

— Bakalli, founder of Rotary in Kosova, is a founding and charter member as well as Honorary President of the Club in his hometown-Gjakova/June 30th 2000/.

— On Jan. 7, 2009, the Rotary Club of Warren in Pennsylvania, USA, named Mr. Ruzhdi Bakalli a Lifetime Honorary Member of the club.

— A year later, members of the Rotary Club of Warren elected Bakalli president of the club for the Rotary year 2010-2011.

— Bakalli from Rotary District 7280 was elected as the district’s governor for the Rotary year 2014 -2015. The area covered by Rotary District 7280 is northwestern Pennsylvania, and has 43 clubs with over 1,400 Rotarians. This was the first time in Rotary history, that an native Albanian Rotarian was elected as a District Governor of an American district. This was certainly a very important event and a success in Albanian Rotary history. During his year as governor, Bakalli broke all records in the history of the district in membership growth and donations to the Rotary Foundation.

During his many years of service to Rotary, Bakalli has contributed with devotion to the internationall aspect of Rotary. For the establishment and chartering of Rotary Clubs in Kosova, he has contacted and talked with many prominent personalities in Rotary International. He has consistently been a promoter in directing efforts to bring international humanitarian aid for organizations, families and children in need in different countries.

Bakalli has sponsored more than 200 new members into Rotary. Currently, thanks to his commitment and service along with other Kosova Rotarians, the Kosova Rotary has 12 Chartered Rotary clubs.

Bakalli considered it very important to add to the Rotary Club of Gjakova’s membership growth with honorary members. Besides induction of many well-known personalities in Kosova, he was also able to add the following international personages:

In 2008, he met with President Bill Clinton and with his consent and desire he declared Clinton a Lifetime Honorary Member of Rotary Club Gjakova.

He has honored three Rotary International Presidents, Frank Devlyn, Wilfrid Wilkinson and Gary C.K. Huang, by declaring them Lifetime Honorary Members of the Rotary Clubs of Warren and Gjakova.

Bakalli is a major donor and a member of the Paul Harris Society. His commitment to Rotary and for those who need help is unlimited. 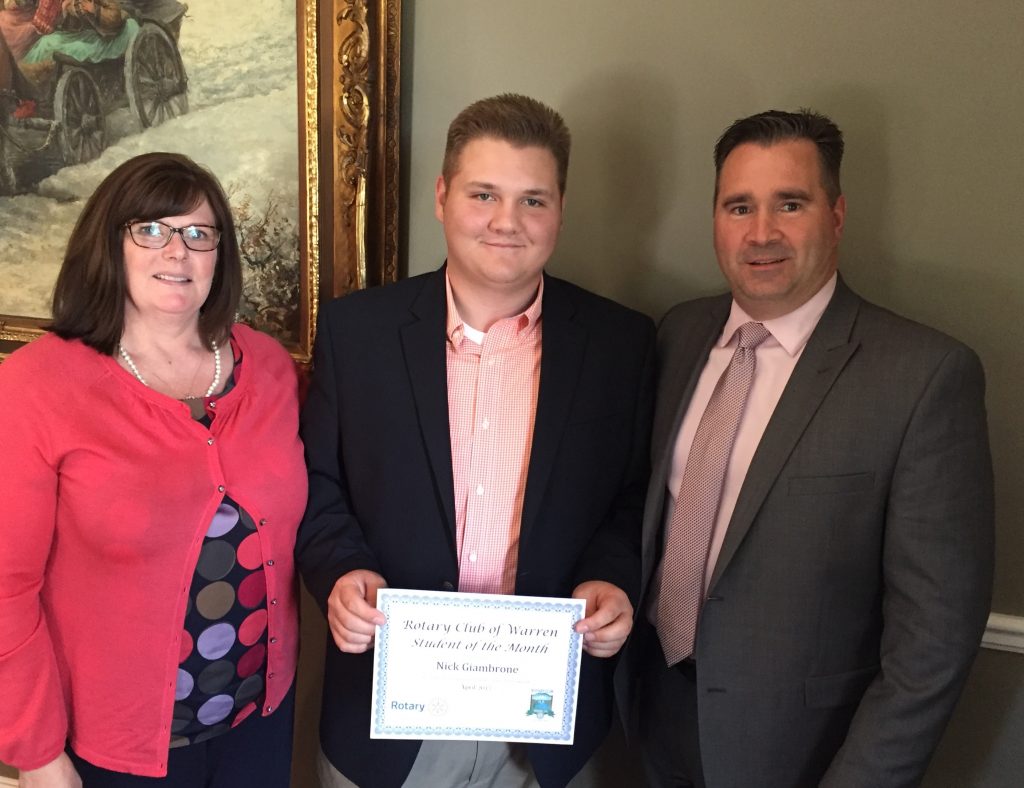 Nick Giambrone is in the center with his mother Deb and father Michael on either side.

Nick is on the golf team and the basketball team. He volunteers at the Guidance Office, he reads the school announcements in the morning, he volunteers at the Allegheny River Cleanup, the First United Methodist Church and at Blueberry Golf Course. Nick is in the National Honor Society and he will be attending Clarion University on a Golf Scholarship in the fall and is planning to major in Business Administration and Information Science. He would like to be a State Trooper when he graduates.

Nick was presented with a certificate and a $25 gift card from Walmart.